Apple announced at Keynote 2020 the first wireless charger from Cupertino for the new iPhone 12 series. The wireless charger, which is based on the usual Qi standard, bears the name MagSafe, just like the wired charger of the Macbook. But the MagSafe Qi Charger has a special feature it docks magnetically to the back of the iPhone 12 and keeps them in the ideal charging position. With the MagSafe Qi Charger, Apple thus eliminates an obstacle to the daily use of wireless charging. Also the performance increases, which makes wireless charging with iPhones much faster. 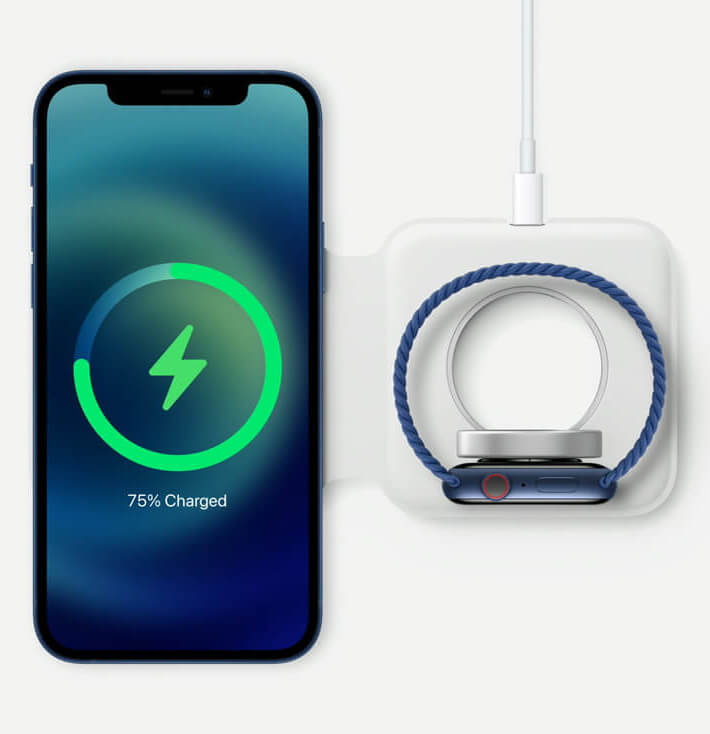 However, the idea of equipping wireless chargers with magnets is not entirely new: As early as the end of 2013, Google released a similar wireless charger for the then Nexus 5, which was also magnetically held in the ideal charging position. Especially Qi chargers for cars are already equipped with this technology, but the smartphone must be retrofitted with the corresponding counterpart.

Placing it with the help of magnets prevents inefficient charging or breaks during wireless charging due to incorrect or non-optimal positioning on the loading surface. This is now a thing of the past with the new iPhones. Even a small leather case for credit cards can be attached to the iPhone 12 in this way. Further third-party accessories have also been announced.

The new MagSafe Qi charger significantly increases performance when charging iPhones wirelessly. Previous iPhone models could be charged wirelessly with up to 7.5 watts. With the MagSafe Qi Charger, this power now increases to up to 15 watts, which makes the charging process significantly faster overall.

A version for simultaneous wireless charging of iPhone and Apple Watch was also presented at Keynote 2020 the MagSafe Duo Charger. This is foldable and can therefore also be used as a travel charger. The MagSafe Charger is backwards compatible with all Qi chargers, so it can also charge Qi enabled devices with lower power wirelessly.

In addition to the MagSafe Charger from Apple, another wireless car mount and a qi charging station from Belkin was announced. Belkin is Apple’s official partner in terms of wireless charging and has already worked with Apple before.

The function of placement using magnets is not new, but it is very beneficial for the further establishment of wireless charging technology, because it makes a big difference in everyday life anyone who has already tested a wireless car mount with magnets will be able to confirm this. The power increase to up to 15 watts does the rest in this respect all in all, great praise to Apple at this point. The MagSafe Charger (single version) is already listed for 39 $. It can be pre-ordered from the 16th and the release date has been set to October 23rd.