Is it possible to charge the iPhone SE wirelessly? We have the answer and all the details on this topic. The iPhone SE is considered a low-cost entry into the iPhone world and is Apple’s economy model. However, it is by no means technically backward, but has many features of the expensive iPhones built in. The third edition of the iPhone SE also has inductive charging, which is often not the case in the budget models of the competition. But there are differences in the wireless charging of the SE models, which we would like to discuss in more detail. Here you find all you need about iPhone SE Wireless Charging.

The iPhone SE (2022) stays true to its old design line and still has a physical home button, which pleases many fans. The battery performance and the other features are also quite remarkable for this price. However, we have to make concessions in terms of wireless charging: The iPhone SE 3 (2022) is unfortunately not MagSafe-capable.

Starting with the 12th model series, Apple introduced the in-house Qi charger that attaches to the smartphones via magnets. This makes the MagSafe charger very convenient for everyday use, since you do not have to find the exact charging position and can still use the device well while charging. But do you have to completely forgo this convenience with the iPhone SE? More about that later.

Wireless charging was installed by Apple starting with the iPhone 8 in 2017. The iPhone SE (2016), which was released a year earlier, unfortunately has to do without this technology, at least out of the box. The 2nd generation iPhone SE (2020) supports inductive charging via Qi standard, just like its successor, and can basically be used with any Qi charger. However, the iPhone SE from the 2nd generation unfortunately does not support MagSafe. We have described what that means exactly below.

These iPhone SE models can be charged wirelessly:

Wireless charging with the iPhone SE 2022 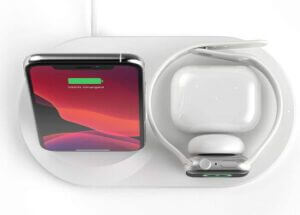 The iPhone SE 3 reaches a power of 7.5 watts during wireless charging. So, corresponding Qi chargers should have this power level.

A MagSafe charger can be used as well since the Qi standard for inductive charging is always backwards compatible. However, the power of 15 watts, which is common for MagSafe, is unfortunately not reached for the iPhone SE of the 3rd generation.

The following Qi chargers with 7.5 watts are suitable for the iPhone SE:

Since the 7.5 watt power level for iPhones dates back to a time when there was no in-house MagSafe charger, there are official recommendations from Apple for corresponding charging stations. The manufacturers collaborated with Apple in the development and the devices were optimized for iPhones (“Made for iPhone”). More detailed descriptions of these official models can also be found in the article: iPhone wireless charging.

iPhone SE MagSafe: Can MagSafe be retrofitted to the iPhone SE?

Unfortunately, wireless charging with up to 15 watts cannot be retrofitted to the iPhone SE (2022), but the practical magnet function can. This function allows the phone to be easily docked onto the MagSafe-enabled charging station. Numerous third-party manufacturers offer such iPhone SE 3 (2022) MagSafe cases. Since the iPhone SE 2 (2020) has the same dimensions, you can easily upgrade the MagSafe feature with an additional case here as well. 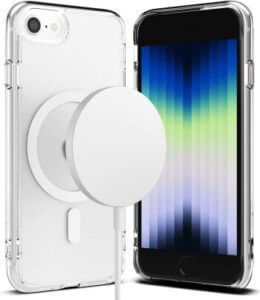 Another option to retrofit the MagSafe function is the Mophie Snap adapter. This is a magnetic ring that is simply stuck to the smartphone’s back or case. Thus, almost every smartphone can be equipped with the practical magnetic holder. However, this only works as long as the smartphone is of a sufficient size. The dimensions of the first iPhone SE (2016) are unfortunately not sufficient for this. Otherwise, the MagSafe adapter can be used universally. If you want, you can also use it to retrofit an Android smartphone with MagSafe.

Together with the so-called Snap adapter, the practical metal ring, Mophie offers other Snap accessories, such as a MagSafe-like wireless charger, a wireless charging stand and a car mount. Especially in the car, it is very convenient to clamp the smartphone magnetically to the holder when getting into the car instead of plugging in the charging cable with the second hand. The magnetic holder is strong enough to hold the phone firmly in place even when it is shaken.

Besides Mophie, other manufacturers also offer similar accessories, some of which are more similar to the MagSafe design. We recommend retrofitting this feature to non-Apple devices as well, because it makes wireless charging even easier especially in the car. 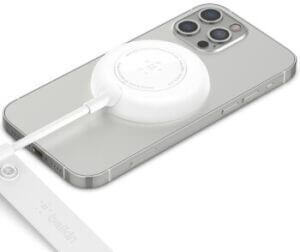 The Qi chargers for the iPhone SE mentioned above are not generally MagSafe compatible, except for Apple’s in-house version. So they don’t have magnets to hold the smartphone in place. So, if you want to upgrade your smartphone with MagSafe, you should go for one of the following Qi chargers with MagSafe feature:

Inductive charging on the iPhone SE 2 2020

The iPhone SE 2 (2020) is also equipped with the Qi standard for inductive charging ex-works. It is also charged wirelessly with up to 7.5 watts.

The popular MagSafe function can also be retrofitted here in principle via a corresponding case, which unfortunately does not increase the charging speed. Only the standard models on the iPhone 12 reach the full power of 15 watts with a MagSafe charger.

Since the 2nd generation iPhone SE can also be charged wirelessly with a maximum of 7.5 watts, the same Qi chargers are recommended here as in the section above on the 3rd generation. Some of them are officially recommended by Apple, which is still from the time when there was no in-house MagSafe charger. 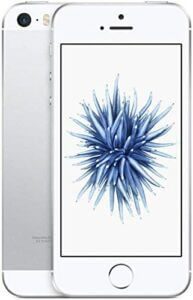 Generally, wireless charging can be retrofitted to all smartphones with Qi adapters. Such charging receivers are attached to the back of the smartphone and firmly connected to the battery via the port on the bottom. The performance of these Qi receivers generally varies and thus determines the charging speed during wireless charging. It usually ranges from 1000 mAh to 2000 mAh.

Ideally, they are placed under a cover, but this can reduce the performance a bit for some versions with 500 or 900 mAh. Alternatively, there are Qi cases where the receiver coil has already been integrated into the case these models usually have a power of 1000 mAh. We recommend Qi receivers with a power of 2000 mAh or 10 watts (Fast Wireless Charging) in combination with a thin plastic case at this point. With this design, the old iPhone SE (2016) is hardly inferior to its successors in terms of charging speed during inductive charging provided a correspondingly fast Qi charging station (10-15 watts).

Can I charge the iPhone SE wirelessly?

The iPhone SE 3 (2022) and iPhone SE 2 (2020) models support wireless charging via Qi standard ex works with a power of 7.5 watts and can be charged with any Qi charger. The old iPhone SE (2016) can be retrofitted via universal Qi adapters.

Can the iPhone SE 2022 charge wirelessly?

The iPhone SE (2022) can be charged wirelessly just like the second generation. A maximum power of 7.5 watts is supported here. A use with Apple’s MagSafe chargers is not planned, but you can retrofit the magnet feature via MagSafe cases or Snap adapters, but this does not increase the charging power. However, it is still possible to use the device with a MagSafe charger.

Out of the box, both the 2nd generation and 3rd generation iPhone SE models support inductive charging via the universal Qi standard. The maximum power is 7.5 watts.

Does the iPhone SE support MagSafe?

Unfortunately, the iPhone SE models do not support the MagSafe feature out of the box, but they can be retrofitted via special cases. However, this does not increase the charging speed, which is usually 15 watts with MagSafe. However, a MagSafe charger can still be used with the 7.5 watt power level.

How can you retrofit MagSafe?

To retrofit the popular MagSafe function, it is sufficient to equip the smartphone with a MagSafe case suitable for the respective model. Alternatively, you can attach a so-called snap adapter, which corresponds to a magnetic ring, to the smartphone. The latter can be used universally and fits almost every cell phone model.

How fast is wireless charging on the iPhone SE?

The iPhone SE 2 and iPhone SE 3 support wireless charging with a maximum power of 7.5 watts, which corresponds to Apple’s initial power level. Subsequent versions charge with a power of currently up to 15 watts.

Can I use any wireless charger for the iPhone SE?

Conclusion: iPhone SE can charge wirelessly, even with MagSafe.

If you don’t want to miss out on the convenience of wireless charging with Apple’s low-priced iPhone SE models, you’re in luck. Even though the charging speed does not match that of the top models, this feature can be used. Even the useful MagSafe function can be retrofitted via special third-party cases, which does not increase the performance, but the practical magnet function of the MagSafe chargers can still be used. The first generation of the iPhone SE does not support wireless charging ex-factory, but it can be retrofitted with this feature via universal Qi adapters unfortunately, MagSafe is not available at all.