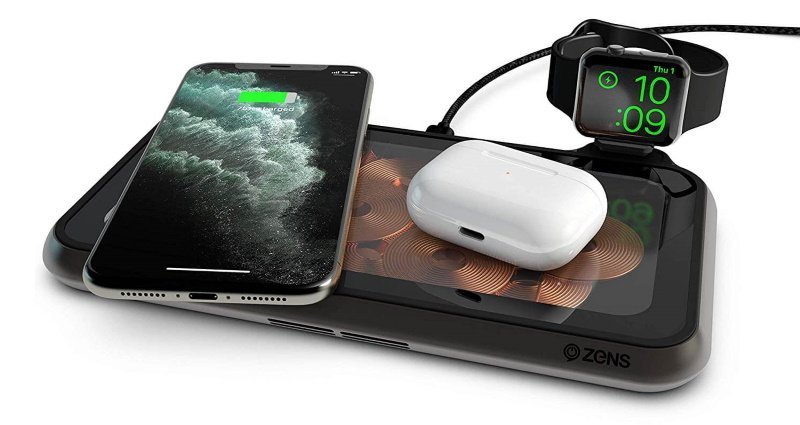 After the Apple AirPower was officially canceled last year, new rumours about the Apple charging mat are currently coming up. Already announced for the iPhone 8 or iPhone X in 2017, Apple had to terminate the project of a wireless charging mat due to “technical issues”. But currently there are hopes for Apple fans again: New rumors now assume that Apple is not entirely averse to this topic and will launch an AirPower charging mat in 2020. We have collected all the rumors surrounding the appearance of the Apple charging mat and also present the best AirPower Alternatives that are already available.

Announced in 2017, cancelled in 2019 and a (small) revival in 2020? According to the Californian company, the AirPower loading mat could not meet its quality requirements harsh words from a leading global technology group, at the same time reliable alternatives were already being offered. Even many no-name suppliers jumped on the bandwagon, took advantage of the situation and developed very similar models in appearance and function at reasonable prices. Meanwhile, the bad news for Apple doesn’t stop there: at the beginning of the year, a replacement for the iPhone Smart Battery Case was launched, which has problems recharging. Is wireless charging developing into a farce for Apple?

Well-known manufacturers, such as Mophie, are now following suit. First and foremost: the small, Dutch manufacturer Zens with over nine years of experience in wireless charging for smartphones. Besides numerous AirPower-like charging mats, he currently offers the only real AirPower alternative “Zens Liberty” with 16 induction coils inside. Up to now, a maximum of 2-3 coils per charger has been used. We will go into this model in more detail in the following. First the question: Is the Apple charging mat coming onto the market after all?

The most important facts in brief:

What is Apple Airpower? 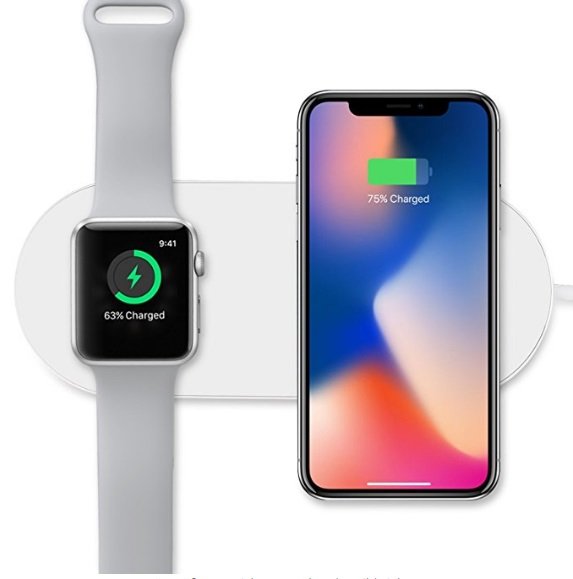 The Apple AirPower combines all the advantages of wireless charging and is designed to bring it to perfection. The original idea behind the AirPower charging mat is to offer a charging station for up to three end devices. The iPhone, the Apple Watch and the Apple AirPods should be able to charge wirelessly on one charging mat at the same time. Also, the placement on the Apple charging mat should be completely free, for which a multitude of induction coils are required. Of course, the faster wireless charging standard 7.5 watts should also be supported. All these requirements overwhelmed the Apple developers, so that the AirPower was officially canceled last year.

When will Apple AirPower Charging Mat be available?

Apple AirPower Alternative Sararoom 2 in 1 ChargerThe current rumors about the appearance of an Apple Charging Mat resulted from communication from analyst Ming-Chi Kuo to investors. According to this, the Apple Charging Mat would be on a list of products that should be on the market by mid-2020. This comes as a complete surprise after the development work was officially stopped. Perhaps this is why the analyst assumes that it will be a modified, smaller form of AirPower. Whether it will be able to charge three devices wirelessly at the same time is now more than questionable.

What is clear, however, is that Apple surprisingly secured the term “AirPower” as a trademark with the WIPO (World Intellectual Property Organization) as early as July last year, after the project was officially terminated a few months earlier. And not just as a brand name, but in the specific context of a charging station for electronic devices. So is the issue not off the table after all? We don’t think so and expect the AirPower release by mid-2020. The rumors of the analysis also assume a smaller version of the Apple Qi charging mat. The release date of AirPower could be as early as the end of March, as this is traditionally an Apple event: Our guess is Monday, March 23, 2020.

In addition to a wireless charging station, according to analyst Kuo, the iPhone SE 2 and iPhone 9 are also on the list of new products. There are all sorts of the usual items, such as a new iPad Pro, more MacBooks and once again new AirPods. But how much will Airpower Cost? Here we estimate a price of 70-90€ for a smaller model that can only charge one device at a time. Should there be an AirPower with several charging surfaces in 2020, we assume a non-binding introductory price of about 130€. This also corresponds to rumors from China, where a technology magazine received information from unknown sources about the price, which is said to be 149 US dollars.

In order to find the right AirPower alternative, first it is necessary to understand the cause of failure. Because the problem that finally forced Apple to give up prematurely was: The AirPower should charge not only the iPhone, but also the wireless headphones AirPods (with charging case or AirPods Pro), as well as the Apple Watch wirelessly and that at the same time, if necessary. For this purpose, a completely free placement of the end devices on the charging mat and “fast charging” should be possible. Experts suspect the problem here, because it would be technically not trivial to correctly control a large number of induction coils, which are also supposed to charge several devices at the same time, and prevent interference. In addition, the temperature development increases with several end devices, which is further aggravated by the faster fast charging.

A task that Zens has mastered and is now freshly launching the Zens Liberty with 2 x 15 watts of power on the market even if the Apple Watch has to find room on the additional add-on as the third end device. But even at the time of Apple’s failure there were already alternatives: We reported in the article “iPhone wireless charging” and also showed some models.

When looking for an AirPower alternative, it is important to know if you need a wireless charging mat for three end devices. If not, there are already numerous models from well-known manufacturers that can charge one or two end devices wirelessly without problems. However, if you want to charge three end devices wirelessly at the same time, the air is already getting thinner and there are only a few, mostly high priced models left. For real fans and all others, we would like to share these with you.

Here we have an overview of the currently best AirPower Alternatives 2020: 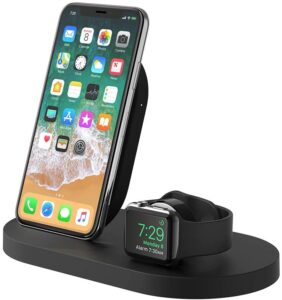 Last but not least: While the Belkin Boost Up Charging Cradle cannot charge two smartphones at once, it is one of the most popular and reliable models on the market. In addition to an upright smartphone charging surface, it is also suitable for charging the Apple Watch.

Belkin is the No. 1 third-party manufacturer of wireless charging accessories and also a partner of Apple, so we can recommend Belkin Boost Up as an AirPower alternative. The 7.5 watt stage of the Qi standard is also on board here.

The current bestseller in terms of AirPower alternative is the Zens 3-fold Aluminum Wireless charger including charging stand for Apple Watch Mfi-certified, of course (“Made for iPhone”). It offers what Apple couldn’t, and has been doing so since the end of 2018 simultaneous, wireless charging of three end devices. But quality has its price: The recommended retail price is €99, but on common platforms it is traded for about €70-80. An alternative would be the Zens Dual Charger, also available in an aluminum version. All modern Zens models support the faster 7.5 Watt Qi charging for Apple iPhones.

As Apple’s partner in wireless charging technology, Mophie is now apparently going its own way and announcing an in-house alternative to the AirPower mat at the CES 2020. In the past, Mophie helped the company from Cupertino and sold wireless chargers via the Apple shop. In the meantime he also offers new models via other platforms, such as the Mophie 3-in-1 wireless charging pad a clear declaration of war on Apple. Mophie is also known for its reliable quality and offers high-quality alternatives to the AirPower mat.

Now the parent company “Zagg” has announced in an interview with Bloomberg a new wireless charging mat from Mophie, which is supposed to charge up to three end devices (including Apple Watch) wirelessly. However, the exact release date is still unknown. This model is also officially offered via the Apple shop, but in a similar design with a smooth surface. Another Alternative is the smaller Version mophie Dual Wireless Charging Pad.

Also often discussed as an alternative: The Nomad Base Station incl. Apple Watch charging station. The very good looking Qi charging mat is equipped with a real leather surface and aluminum housing. It can optionally be purchased with an Apple Watch charging station and otherwise allows up to two smartphones to be charged at the same time. Inside the AirPower Alternative NOMAD Base Station there are only three induction coils working compared to the Zens nevertheless this is still the current standard and anything but wrong. The Apple Watch Series 4 and all older versions are supported.

What Apple has taken over was no problem for Zens: An induction charger with 16 coils, which makes fast (2x 15W) and simultaneous wireless charging possible. Up to three end devices can be simultaneously supplied with new energy via the AirPower alternative Zens Liberty using the Apple Watch Add-on. The high number of coils allows a completely free placement on the Qi charging station and is a big difference to most of the currently available wireless chargers. But even the predecessor was able to charge several devices wirelessly at the same time Zens may have been slow to get to grips with this, because after all, this manufacturer has always placed great emphasis on quality and flawless function.

The design also seems to have been taken into account: the AirPower Alternative Zens Liberty can be ordered either with a high-quality textile (90% wool) or with a transparent glass surface. The latter is presumably a concession to the proud developers who have defied the global corporation. When it comes to alternatives for the AirPower Qi charging mat, the Zens Liberty comes first for us the only real difference to the originally planned AirPower version: the Apple Watch has to fit on the separate add-on in the Zens Liberty. If you are looking for a slightly cheaper model, you can take a look at the other wireless charging products of Zens here.

Low-cost AirPower Alternatives at a glance

Conclusion: Apple Charging Mat can come the competition is strong

Apple could not stand this humiliation and quietly and secretly worked on an AirPower charging mat. Even though a simpler version of the AirPower mat will now be on the market, one thing is clear: the competition is significant and Apple has to dress warmly. Because about three years after the original announcement and the idea of a wireless charging station, which can charge three end devices wirelessly at the same time, has now passed and the competition, as is well known, never sleeps. Reliable models that have taken up Apple’s idea have been on the market for a long time, and with the Zens Liberty, a wireless charging mat that broadly corresponds to the idea of an Apple AirPower charging mat has recently been introduced. We are curious to see how Apple will react and how this market will develop further here at Qi-Wireless-Charging.net we will keep you up to date.