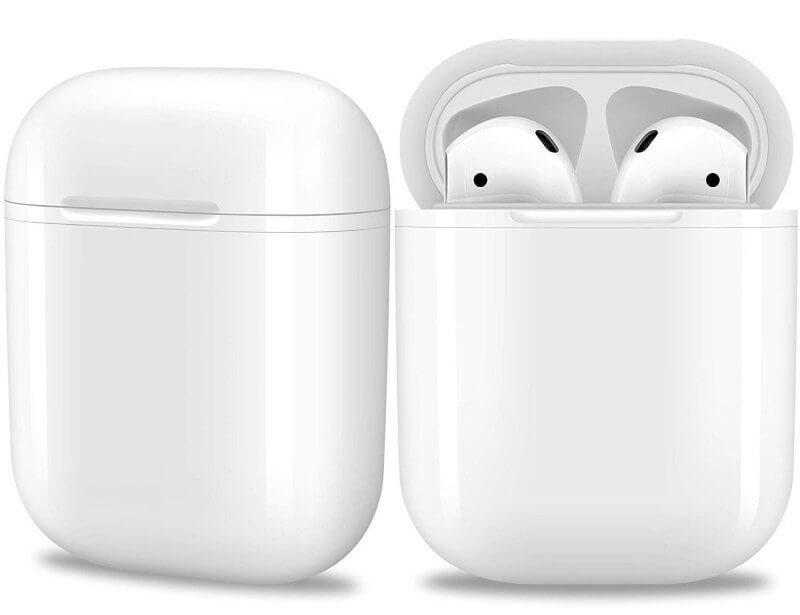 Charging AirPods wirelessly is easier than you think and it is worth buying an AirPods Qi case! Apple itself has announced that there will soon be a new case for its Bluetooth headphones, but an exact date was not known at the time. That’s why some third-party vendors set out to offer a low-cost solution for the first-generation AirPods before Apple itself came around the corner with an official solution. We took a closer look at various AirPods Qi cases and came to a consistently good conclusion. UPDATE: In the meantime, the AirPods 2 generation with an optional Qi charging case has been introduced. This means that the Apple AirPods Bluetooth headphones are now officially Qi-capable. The AirPods Pro and AirPods 3rd generation also come with a wireless charging case as standard and optional, respectively. 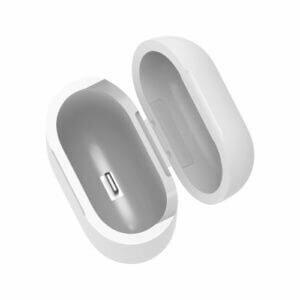 Apple AirPods Qi Case and Charging Case Many iPhone and Android users are increasingly opting for wireless charging.But this is a bad thing if additional devices such as Apple’s AirPods do not support this standard, and you are still dependent on charging cables in everyday life. In the case of the AirPods, smart developers had now come up with a quick solution even before the company itself was able to offer an in-house alternative. So-called Qi sleeves or charging cases for Apple’s Bluetooth headphones make it possible to retrofit the wireless charging standard. For this purpose, the original charging case is inserted into a new charging sleeve, which enables inductive charging by Qi standard through a receiver coil. It sounds simple, but it is moreover, such charging cases are quite inexpensive compared to the original accessories that might be released soon.

How to charge AirPods wirelessly?

While you could only charge the first generation of AirPods wirelessly with retrofitting, Apple subsequently made wireless charging an optional standard for the different AirPod generation. Here is an overview of the models that can be charged wirelessly:

When Apple came onto the market with its iPhone and later with the iPad, the manufacturer supplied wired headphones. But on September 7, 2016, Apple introduced wireless Bluetooth headphones. To use these devices optimally, an iPhone, iPad, or iPod touch with at least iOS 10.2 is required, or an Apple Watch with WatchOS 3. But even modern Android smartphones have no problems at all to connect to the headphones via Bluetooth even on a Windows PC or laptop, this is possible with the right Bluetooth receiver. The AirPods are charged via the included case, which in turn has to be charged via the Lightning connector and thus functions as a portable battery.

There have been rumors for some time that Apple would like to make wireless charging possible for the AirPods. The market launch was  announced for September 2017, but the necessary Qi charging station has not yet been released. This may be related to strategic considerations.After all, the company is planning to introduce the next generation of its Bluetooth headphones soon. On relevant websites, you can read that there will not be a Qi charging station until the presentation of the AirPods 2. The reason for this could be that Apple would like to make it possible to charge its Smartwatch with the same device.

However, the long development time could set Apple a bitter setback, as there are already several third party suppliers on the market who offer corresponding Qi charging cases for Apple’s Bluetooth headphones. Various AirPods Qi cases, mostly directly from China, are provided via amazon.de. But also well-known manufacturers, such as hardwrk, have discovered this market for themselves and offer a similar product. In order to be able to charge Apple’s Bluetooth headphones completely wirelessly, the actual charging case requires an additional Qi cover, in which a corresponding receiver coil for inductive charging according to the Qi standard has been installed. The technology is comparable to retrofitting with a Qi adapter.

There is not much to consider when choosing the right Qi Case we ordered a cheap model from China and have been using it for six months. The handling is very easy just put it down and charge it and we are completely satisfied, even if it was a first-generation Qi Case. The haptics and the excellent design of the AirPod charger case are not affected by our point of view – also, the folding mechanism including folding noise, still works without any problems. A green jam LED is placed on the bottom of the Qi Case to indicate the charge status. In principle, these cheap models work perfectly, but one should still instead focus on quality in view of  longevity.

Meanwhile, the german mobile phone accessories and 360 degree camera manufacturer hardwrk have also launched an AirPods Case with Qi charging standard for the 1st airPods Generation. We strongly recommend to use this more sophisticated version instead of low cost versions costs for shipping from China will also be saved. The hardwrk Qi Case does not only have the usual protection against overvoltage; it can be attached and removed easily. A green status LED is also built-in and shows the charging status. Due to the Qi standard, the charger case can be used with any standard Qi charger. Hardwrk has also launched its own Qi charger with up to 10 watts to match the Qi Case. So nothing stands in the way of charging your AirPods wirelessly!

Apple AirPods Pro Qi Bluetooth Headphones With the latest generation of AirPods, the AirPods Pro, wireless charging via induction, will become standard for Apple’s Bluetooth headphones in November 2019. The battery life has also been increased to about 24 hours (incl. case). Apart from that, the AirPods have been equipped with the long-awaited active “noise canceling”, which makes them the absolute highlight in this product class.

There had been many rumors about the release of an Apple AirPower charging mat, which could be released at the same time as the new AirPods 2 generation. Wireless charging should be possible with the new generation ex works. Above all, it is expected that the latest version of Apple’s Bluetooth headphones will support voice control via “Siri.” This would enable them to be operated by voice before Bluetooth pairing and prompted to do so.

Also, a waterproof version of the wireless Bluetooth headphones will be available for the first time. So far, there are no concrete “leaks” in terms of Qi support, but it has been discussed in the community for years. Current rumors expect the new AirPods 2 generation to be released in March or April 2019 we are curious!

Now it’s official: Apple introduced its new AirPods 2 generation on March 20, 2019. The new AirPods 2 have a wireless charging case and therefore support the Qi standard but a Lightning connector is still available. Strictly speaking, Apple offers the AirPods 2 with and without a wireless charging case. The pure Qi charge case can also be ordered, for example, to retrofit the first generation of Apple Bluetooth headphones with the Qi standard. The price of the single Apple charging case is 89€, which is many times higher than the hardwrk version described here. The difference: At least the dimensions are more compact because you don’t have to put the original charging case into the hardwrk case anymore. But this is not the only difference.The technology inside the new AirPods and the charger case has been improved.

This makes the AirPods True-Wireless earphones officially Qi capable, at least with the offered Qi charging case. Apple continues its way with the wireless charging technology. Even the older version can now be retrofitted with original accessories. However, AirPods 2 have also been technically upgraded, and a new “H1” chip has been installed to control and improve the sound quality, which should also significantly increase the talk time.

Meanwhile, competitor Bang &Olufsen has already announced a new version of its premium Bluetooth headphones Beoplay E8, which will be released in February 2019 and which has a charging case that supports wireless charging via Qi standard. Samsung has also jumped on this bandwagon with its Galaxy Buds Bluetooth headphones, which were released with the Galaxy S10 and helped the Qi charging standard ex-works. In essence,they can even charge wirelessly simply by placing them on the back of the smartphone. Samsung calls the whole thing “Wireless Power Share.” This feature is currently definitely an advantage over Apple. Huawei, as the pioneer of PowerShare technology, has similar plans for the Huawei Freebuds 2 Pro. An overview of all Qi Bluetooth headphones can be found further down in this article.

Qi Bluetooth headphones Parrot ZIK 3Recently, more and more Qi Bluetooth headphones appear on the market that can be charged wirelessly usually in the charging case provided for this purpose. After all, the advantages of wireless charging outweigh the disadvantages, and in addition to many smartphones, more and more wearables support the Qi standard. Especially if you already use a Qi charging station for your mobile phone, this kind of charging is also suitable for Bluetooth headphones. Besides charging sleeves for Apple’s version and the Beoplay E8 2.0, many Bluetooth headphones with Qi standard from unknown manufacturers have been released. But is this trend new? Not at all, because the Parrot ZIK 3 has already been released at the beginning of 2016. Although they are still connected by a bracket, they are also inductively charged. At about the same time, a Kickstarter campaign was launched, which also ended successfully but unfortunately, the “Truu wireless earbuds” are not available in this country. In the following you will find a list of currently available and planned Bluetooth earbuds that can be charged wirelessly:

AirPods Charging Station Combination of both

AirPods Charging CradleFor those of you who are patient and can do without wireless charging for your AirPods for the time being, there is still a matching charging cradle that combines inductive charging for the iPhone with a Lightning connector for the Bluetooth wireless headphones. So you don’t have to buy a Qi charging case and can still enjoy the benefits of wireless charging. AirPods charging stations are offered by different manufacturers and in variousdesigns. On the one hand, there are models that offer only a single connection for Apple’s Bluetooth headphones, and on the other hand, there are models that also provide space for charging the iPhone and sometimes also the Apple Watch.

The original charging case with the Lightning connector is plugged into the Qi Case, which is able to be charged inductively with any conventional Qi charger. So far, however, there have been no reviews of the Qi cases for AirPods. However, a product from China is available to the editors and has been performing its service reliably for months. The somewhat high-quality hardwrk Qi case is also offered in black and is our clear recommendation at this point.

Several crowdfunding projects that promise high quality have already been announced but are not yet ready for the market one of them is the AirPlus project on Indiegogo. What is certain, however: At a price of between 15 and 25 euros, one can certainly try to test the advantages of this technology for oneself. An overview of popular AirPods Qi Case models can be found under the following link: