Tablets with Wireless Charging are unfortunately still very rare on the market there are currently only a few models with inductive charging function, which we are constantly recording in a Qi Tablet list. You still want to charge your Tablet wirelessly? We have looked at the possibilities to make Tablet PCs Qi capable. Non Qi-capable Tablets can be upgraded with special Qi receivers. For Apple’s iPad, additional cases and inductive charging stations are available. A wireless iPad wall mount is also available. Currently there is some movement in the market: Huawei announces a 10.8 inch Qi Tablet, but unfortunately only the Chinese market so far.

The Wireless Charging standard Qi is mainly popular in the Smartphone segment. Here, there are already a large number of mobile phones that either has the Qi standard permanently installed or are intended for upgrading by the manufacturer. Otherwise you can also find a remedy with universal Qi receivers and retrofit your smartphone with wireless charging. But what about Qi capable Tablets? Which Tablet models can be charged wirelessly and how can I retrofit a Tablet with the Qi Standard? Questions that we want to clarify in this article.

Why are there hardly any Tablets with Wireless Charging? 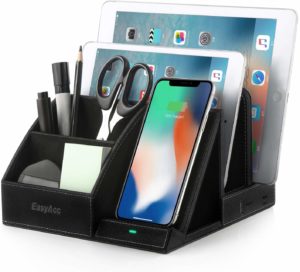 We can only speculate why there are so few Qi-capable Tablets at the moment: A possible problem, why there are few Qi Tablets available, is probably the higher power consumption and a correspondingly larger battery of this device class. As a result, a charging process per Qi standard takes longer than is the case with smartphones after all, a larger battery has to be charged. However, this does not take into account the fact that Tablets are often used rather comfortably in one’s own four walls, where they could be recharged overnight. Even on the road, there is still the possibility to charge via cable, if you urgently need new battery power.

Furthermore, Samsung already includes the faster “Fast Wireless Charging” standard in the Galaxy S6 edge+, which would counteract the problem described above. This faster inductive charging standard was already certified some time ago by the WPC, the committee of the Qi standard, and made available to manufacturers.

Another possible reason why Qi Tablets are rare so far is the smaller target group and the associated longer product cycles. Apple iPad 2 Qi-standard retrofit with iPort LaunchPort Qi stand smartphones are sold much more frequently and developed faster. There is also higher competition and correspondingly greater pressure for innovation among manufacturers. This pressure to innovate is making it more relevant to add new features in order to stand out from other manufacturers and hold their own against them. However, this is also not a real reason for the absence of Qi Tablets.

If you can think of further explanations why only a few Qi-capable Tablets have found their way to customers, or if you have questions or additions, you are welcome to leave a comment below this article!

How to Upgrade iPad or Any Tablet with Wireless Charging 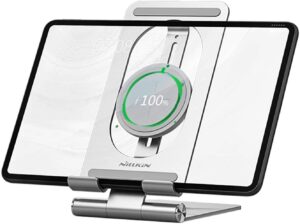 The best way to upgrade your iPad or any tablet with wireless charging is to use a Wireless Charging Receiver, which is placed on the back of the device and connected to the usb port. Such qi receivers must be suitable for tablets and therefore have a longer cable. The following solution from Nillkin is an all-in-one solution and besides the special Qi Wireless Charging Receiver also includes a qi charging station suitable for tablets:

Since there are currently very few Qi Tablets on the market, it is hardly worthwhile to keep a list of them. So far, only the manufacturer Hewlett-Packard with the HP TouchPad (2011) and Asus in cooperation with Google and the Nexus 7 (2013) have released inductively rechargeable Tablets whereby HP doesn’t support the Qi standard. Finally, the long announced Samsung Galaxy Fold has also appeared on the German market, but at a high price. On the other hand, it also supports Wireless PowerShare to be able to charge other devices wirelessly.

With the Huawei Matepad Pro, there is now some movement in the market, but unfortunately it has only been announced for the Chinese market so far. There it is supposed to support reverse wireless charging in addition to the Qi standard for wireless charging and thus be able to charge other devices wirelessly. Nevertheless, we have already created a Qi Tablet list for the future and collected larger Qi Chargers for Tablets:

In mid-2020, Amazon launched the 10th generation of Fire Tablets the Fire HD 8 Plus, the first in-house 8-inch tablet with Qi charging built-in. The battery can be fully recharged in less than 3 hours thanks to a 10-watt charging speed without a cable. Amazon offers its own charging dock for this, which also functions as a stand for the tablet. It can be purchased separately or in a bundle with the tablet. Alternatively, it can be charged with up to 15 watts via USB-C. Amazon states a battery runtime of 12 hours. Depending on the purchased version, 32 or 64 GB of storage space is available in combination with 3 GB of RAM and a quad-core processor with 2.0 GHz.

SAMSUNG Galaxy Fold 5G Qi TabletSamsung unveiled the first foldable smartphone at its Unpacked 2019 event. When folded out, it can already be counted as a Tablet at 7.3 inches. It will officially be released in stores on April 26th. The two-part battery with a capacity of up to 4.380 mAh can be charged wirelessly using the Qi standard as well as the competing PMA standard and can supply other devices with power via WirelessPowerShare. Otherwise 12GB RAM and 512 GB memory with a 2.84GHz processor is installed. Due to the very complex production of the flexible display, ETNews reports that the number of units will be limited to 100,000 per month. Suitable Qi accessories have not been announced yet standard Samsung charging stations should also work reliably with the Galaxy Fold.

HP TouchPad 2011 Qi-TabletThe Hewlett-Packard Tablet TouchPad already dates from 2011, has a 9.7 inch screen with a resolution of 1024 × 768 pixels and has the in-house “HP webOS 3.0” as its operating system. The main camera has a resolution of 1.3 MP, the dual-core processor is 1.2 GHz fast, or 1.5 GHz for the 64GB model. Otherwise, either 16GB or 32GB main memory is available. WLAN and Bluetooth are also available.

The right Qi Charger for Tablets

With inductive charging stations for Tablets, the size of the device and the number of induction coils installed is of particular importance. The smaller the Qi charging station, the more difficult it is to place the Tablet precisely when placing it on the shelf. The best choice is a Qi stand, which makes it easy to place the Tablet. The coils for inductive current transmission should be available in triplicate if possible, which also facilitates positioning when placing the Tablet down. It’s therefore recommended to fall back on Qi chargers suitable for Tablets, which we’ve added to the list of Qi Tablets currently only the Asus PW200F is specially designed for Tablets, respectively the Google Nexus 7 (2013). Otherwise, it’s also worthwhile to check out the amazon bestsellers or new releases in the induction chargers.

Upgrade a Tablet with Wireless Charging

No Qi capable Tablet? No problem! It is worth looking at the possibility of upgrading Tablets with the Qi standard for wireless charging. A universal Qi receiver is suitable for this purpose, which equips the Tablet with the necessary receiver coil to receive the current of the Qi charging station wirelessly via induction. Such Qi receivers are available in different price ranges, quality and performance.

With Tablets, you should urgently ensure that the Qi receiver has at least 900-1000mAh output power to be able to charge the Tablet as quickly as possible. Otherwise it is recommended to pay attention to existing and positive customer reviews and possibly not to choose the cheapest product. For the area of smartphones we have checked Apple iPad Qi receivers with Lightning connector for upgrading. We have reviewed several Qi Receivers for upgrading, in which you can surely find the first orientation when choosing the Qi adapter for your Tablet.

Another important feature is of course the Tablet’s power connector, which must match the respective Qi receiver in order to charge the battery wirelessly. You could also hide the Qi receiver for the Tablet under a thin protective cover. Qi-receiver pads with a micro-USB connection are basically available in two versions either with the narrow or wide side facing upwards. In this case, it is important to pay attention to the positioning of the connector on the device. Here you can find an overview of different Qi receivers with different connectors:

The Samsung Galaxy Tab series, just like the competition from Apple, can’t be charged inductively without further ado. Here, upgrading is necessary! Fortunately, most modern Samsung Galaxy Tablets have a micro-USB port, so that they can be relatively easily equipped with a universal Qi receiver with wireless charging. For Samsung Tablets with a 30-pin connector, there are currently no suitable Qi adapters available for upgrading. 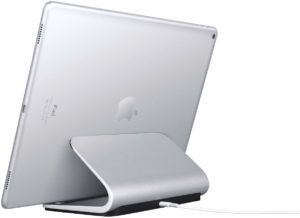 Unfortunately, the Apple iPad does not support wireless charging via Qi standard by default. However, there are other solutions how you can still charge your iPad wirelessly as a Tablet: The iPort Launchport, for example, consists of a set with an induction charger and a matching Apple iPad 2 case. The inductive iPort Launchport charging station is offered as a magnetic iPad wall mount or tabletop charger. Another solution for charging the iPad wirelessly is the Base Charging Station, which has small charging contacts on the bottom.

As described, there are unfortunately no current Qi-capable Tablets on the market at present. Therefore, the only option is to upgrade an existing Tablet with the Qi standard for wireless charging. With the exceptions described above, inductive chargers for Tablets also look bad, but in principle all conventional Qi chargers with the appropriate dimensions are suitable even a homemade device would be possible.